For the Latest Updates and Launches 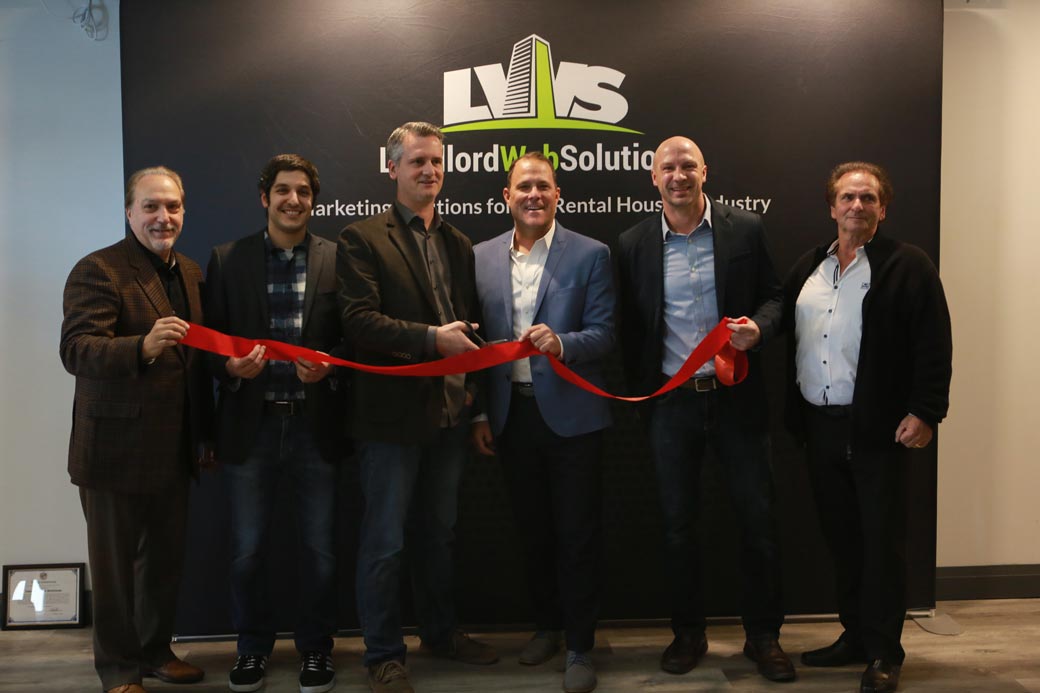 From farms to factories, St. Catharines has been home to some of the most lucrative industries in Canada's history.

But it's companies in the technology industry that Mayor Walter Sendzik says are going to build the next generation of our community.

On Wednesday, Landlord Web Solutions (LWS) held a ribbon cutting ceremony to celebrate the opening of their brand new office in St. Catharines. LWS is a booming tech company that provides a variety of online services such as websites and ad syndication tools for property managers and landlords alike.

With internet technologies fueling some of the most successful industries of today, the Mayor views LWS as manufacturing "in a different way."

In an address to the attendees, the Mayor congratulated the company for their success and officially welcomed them to St. Catharines.

"This is your new home that you're going to be spending a lot of time in, and we can't be more proud," says Sendzik. "We will make sure that the community both here and abroad sees you as the next generation of success of what the new St. Catharines looks like."

Having housed their start-up in small Thorold offices for their first eight years, LWS's move to a new office was long overdue.

"We were bursting at the seams," says Jason Leonard, President at LWS. "We've added more employees in the last year than we had in the entire company in our first four years."

Their new office had to be big enough to accommodate the constantly increasing number of employees the company needs to keep up with their growth. Max Steinman, LWS's Director of Sales who manages the company's sales team in Toronto, sees "tremendous value" in having the head office staff in St. Catharines.

"The affordability of running a full service here is incredible compared to our options in Toronto," says Steinman.

LWS's landlord Nino Donatelli says he was excited to attract LWS with the construction of this new building. Located next to Johnny Rocco's at Glendale Ave. and Merritt St., Donatelli has been renovating and rebuilding what used to be the Domtar Paper Factory for nearly 15 years.

Today, the historic building is also home to The Stone Mill Inn and features a salon, spa, and flower boutique. LWS joins this line-up, with an additional 6,000 sq.ft. of commercial space which is currently for rent at the front of the building. Inquiries can be directed to www.stonemillcommercial.com.

The Mayor also thanks Donatelli for his commitment to turning this pocket of Merriton into a bustling city center for St. Catharines.

"That wouldn't happen without someone wanting to take a significant risk," says Sendzik. "Communities are built by people taking risks, and the first person that took that risk here was Nino."

Donatelli and his team are personally responsible for helping establish the Glendale area towards Merritt St., starting with the introduction of The Keg which helped invite other big businesses to the area in the following years.

Presenting a certificate of congratulations to LWS, the Mayor adds that "this company wouldn't be here today if it wasn't for the vision that [Nino] had 20 years ago."

The LWS team continues to grow alongside their services. The new office offers enough space to house up to 50 employees, a number which Leonard expects to hit in the upcoming years.

"We're constantly on the lookout for new talent," says Leonard. "Our new office is very much a recruiting tool for the company. We want prospective employees to want to be a part of what we're trying to create here."

Sendzik says that St. Catharines has the mechanics to build the workforce that companies like LWS need to continue their growth.

"We've got to showcase more that we have that infrastructure so that companies like Landlord Web Solutions understand that in making an investment in a community like ours, they have the support there that's required," says Sendzik.

As the Mayor turns his attention to establishing St. Catharines as one of those "dynamic, liveable, sustainable cities in North America," he says that LWS represents exactly the type of company the city wants to attract.